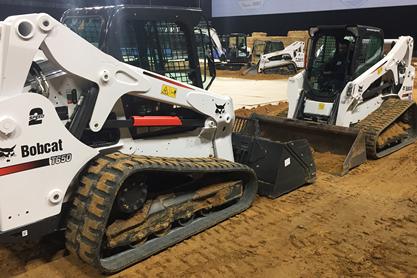 In unusual and demanding conditions, the events company, JLFO, has built Europe’s largest ever Supercross course in a stadium using Bobcat equipment.

In difficult conditions, the events company, JLFO, has built Europe’s largest ever supercross course using Bobcat compact equipment. JLFO built the track for the Paris SX leg of the French ‘SX TOUR’ Supercross Championship in the versatile new U Arena in Nanterre in the outskirts of Paris, which was opened in October 2017. This event had been held for more than 30 years at the Palais Omnisports venue in Paris Bercy, before relocating for the last three years to the Pierre Mauroy stadium in Villeneuve d'Ascq.

To build the track for the Paris SX held on 18-19 November, JLFO teams employed a fleet of machines including three Bobcat compact loaders, a Bobcat compact excavator and a Doosan wheeled excavator to move and shape nearly 4000 m3 of soil to prepare the largest Supercross course ever completed inside a stadium in Europe.

Based in La Bastide-l’Eveque in France, JLFO specializes in organising events in the car, motorbike and quad bike sectors. With more than 200 major events to its credit, JLFO has forged a strong reputation in the construction of off-road tracks for car, motorbike and quad bike racing, as well as handling all of the logistics to accompany the events.

The work of the Bobcat and Doosan machines in Paris comes off the back of the Supercross SX events held the last three years in Lille, where the JLFO teams had used a fleet of Bobcat equipment to meet the challenge presented by only three days being available for assembly of the track and just one night for the disassembly, skillfully handling thousands of cubic metres of earth, while at the same time protecting any grass surfaces.

The challenge of installing the track for the Paris Supercross SX in the U Arena was just as immense. The deadlines were the same with three nights for building the track and only one night to dismantle it. The first job was to protect the lawn and the soil during the weekend. The construction of the track also had to be done at night by the teams in Nanterre. So for three nights, JLFO teams were mobilized to deliver the soil and build the slopes, bumps and other obstacles as required for the track. The Supercross course was finalised on the Thursday before the event, with pilot tests carried out on the Friday. The biggest challenge was dismantling the track overnight on between the end of Sunday and Monday. No less than five earthmovers were used, including a Bobcat E62 compact excavator, two Bobcat T870 loaders, a Bobcat T650 loader and a Doosan DX165W-5 wheeled excavator.

The volume of soil used to prepare the track was considerable: comprising nearly 4000 m3 on a floor area of ​​10.000 m2. The soil was transported in ten 20 tonne trucks from a location in Aubervilliers, six kilometres from the U Arena. The soil was spread in five layers by the Bobcat compact excavators and loaders to create the bumps and hollows of the track. Only the Freestyle bump was an intrinsic structure in itself, which saved about 400 m3 of soil - it was also covered with earth.

Jean-Luc Fouchet, Founding President of JLFO, explained: "Our three Bobcat T650 and T870 loaders and the Bobcat E62 compact excavator allow us to work with the utmost efficiency. When you make a hump in the track, you can climb on it and compact it. We can modulate it and we do not need another machine. With compact track loaders, you can quickly move to stand back, look at the shape and correct it if necessary."

The Bobcat T870 loaders are the largest loaders the brand has ever made. To achieve the feat of preparing and dismantling the track in such a short time, JLFO used three experienced Bobcat drivers. For the duration of the event, Bobcat loaders and compact excavators were at work for the regular repair of the track after the races.

In total, a team of 70 people completed the assembly of the SX track in Paris over three nights and for the disassembly over the last night. The event welcomed over 40,000 spectators on the Saturday and Sunday. As an operational partner, Bobcat invited some of its customers to attend the show over the weekend.

The team was mobilized again on Monday 20 November in Lyon for the next stage of the SX Tour championship. As well as Lyon and Paris, Bobcat is also partnering with JLFO to prepare the Supercross tracks at the Montpellier and Amnéville events that form part of the Championship.