Over the last sixty years, Bobcat has gone through many changes, but one thing has not changed: Bobcat’s commitment to outstanding quality, workmanship and innovation that has helped to maintain its market leadership, so that one in every two skid-steer loaders sold is still a Bobcat machine. Bobcat products have changed the way the world works and today the Bobcat brand and influence is as strong as ever.

In 2018, the range of compact loaders including skid-steer, compact track and all-wheel steer models that Bobcat has developed over the last six decades, continues to dominate the market, combined with a host of attachments to meet every specific customer’s needs. Bobcat has also diversified its portfolio with a full line-up of compact excavators and telehandlers that match the same tough internal requirements on reliability and productivity that Bobcat applies to the company’s loaders. 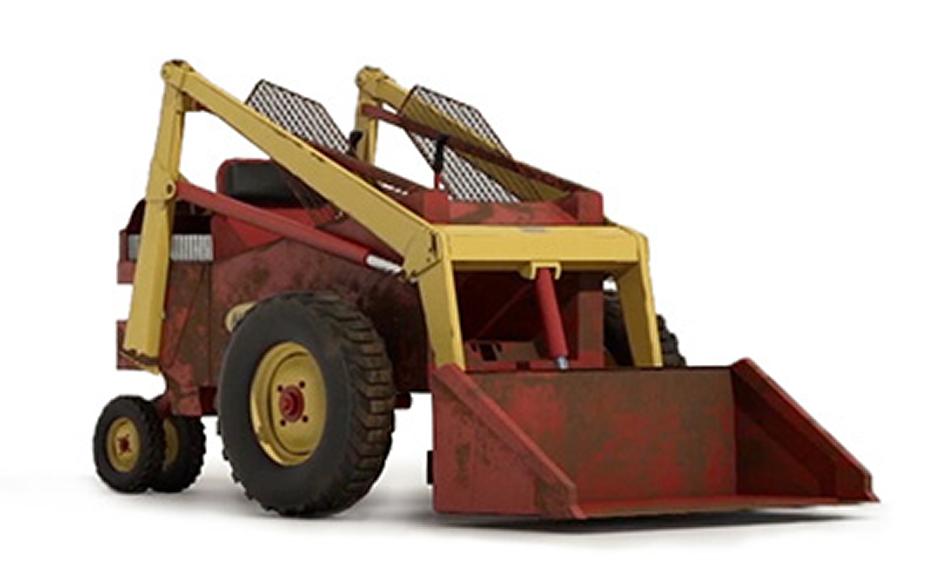 In 1958, Melroe Manufacturing bought rights to a 3-wheeled compact loader from Louis and Cyril Keller and brought the M-60 self-propelled loader to the market. 1959 saw the launch of the M-200, a three-wheeled model powered by a 12.9 HP engine.

The four-wheel-drive M-400 model, introduced in 1960, was the world’s first true compact skid-steer loader. Some 200 units were built.

In 1962 Melroe created the Bobcat brand in honour of the ‘tough, quick and agile’ animal. The first Bobcat-branded skid-steer loader, the M-440, improved on its ground-breaking predecessor by adding a 15.5 HP, 2-cylinder Kohler engine, giving it a rated capacity of 500 kg.

In 1964 Melroe entered the European market and five years later reached over $1m in sales in Europe annually. In 1969 the company was bought by Clark Equipment Company. 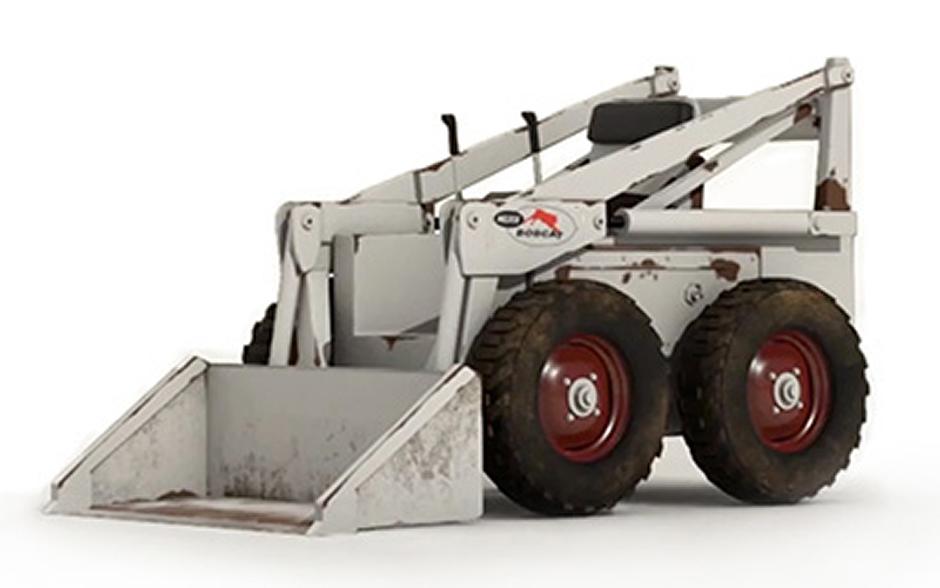 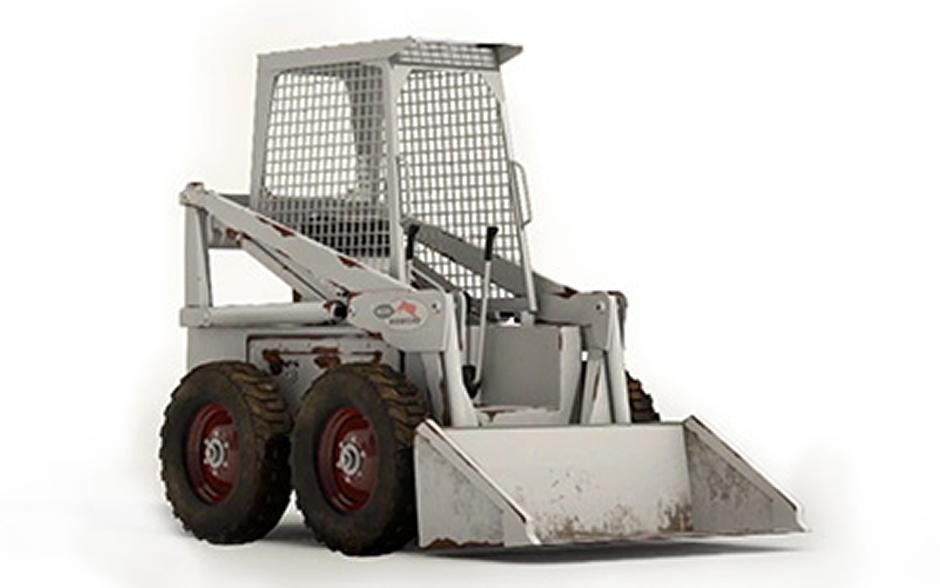 1970 saw the introduction of several key innovations, including the Bob-Tach quick-change attachment system, the ROPS operator guard as well as the M-970 model, the first skid-steer loader with a hydrostatic drive.

In 1972 the M-610 model with a Wisconsin gas engine was introduced and it remained the most popular Bobcat model for the next 10 years. By the end of its life-span, however, it was clear that the industry was moving away from clutch-drive loaders and transitioning to diesel-powered engines.

In 1982 Bobcat introduced the 40 series of loaders, and the 743 model in particular quickly became the world’s most popular product in its class. Bobcat became increasingly popular thanks to a conscious effort by the company management to avoid raising prices while not stripping away features, which turned out to be a significant market advantage in the economic recession of the early 1980s.

In 1986 Bobcat launched two new product lines - hydraulic mini-excavators, built for Bobcat in Japan, and compact trenchers. By 1989 Bobcat begins to build its own compact excavators in Bismarck, North Dakota. 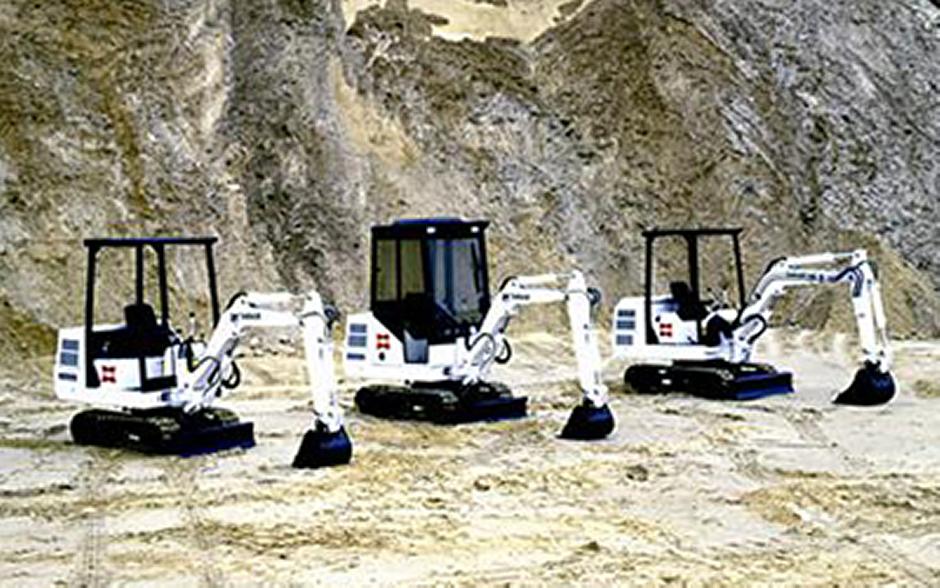 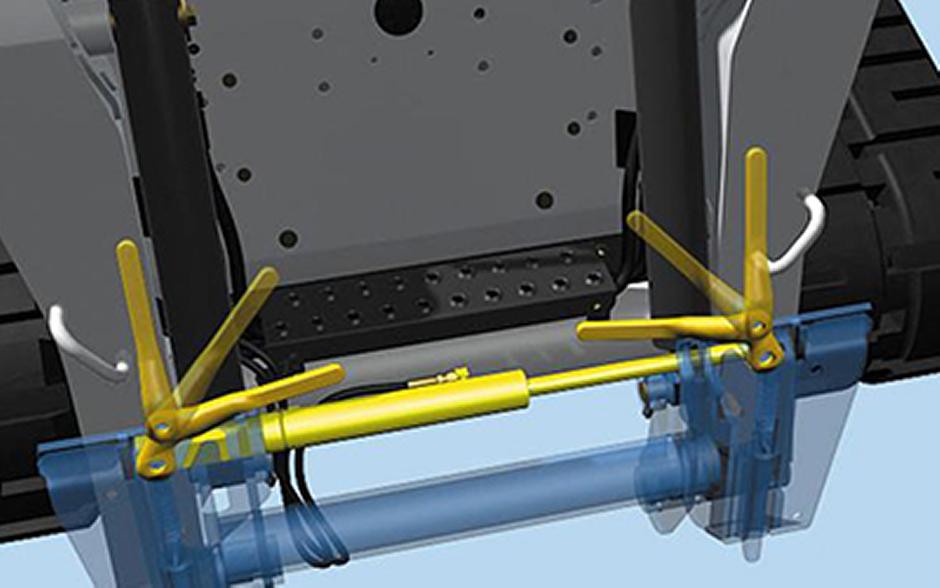 In 1998 Bobcat launched the G-Series loaders with serious focus on operator comfort. New cabs were equipped with air-conditioning, increased elbow room, improved seats and instrumentation. The new hydraulic Power Bob-Tach system gave operators the luxury of changing attachments at the touch of a button. In Europe, Bobcat launched the 864, its first compact tracked loader.

The 773 loader became the most popular of its era and the 773 Turbo 500K edition from 2001 celebrated the half-milionth Bobcat loader production milestone.

In 2000 the Bobcat Company purchased Sambron S.A., a long-established manufacturer of telescopic handlers based at Pont-Château in northwest France.

In 2000 Bobcat revamped its line of compact excavators with the the D-Series, focusing on manufacturability and cost reduction, while adding the X-Change system. Three years later, the G-Series become the first in the industry to add air conditioning.

The A220, introduced in Europe in 2001, was the world´s first compact loader which combined all-wheel steering with skid-steering. 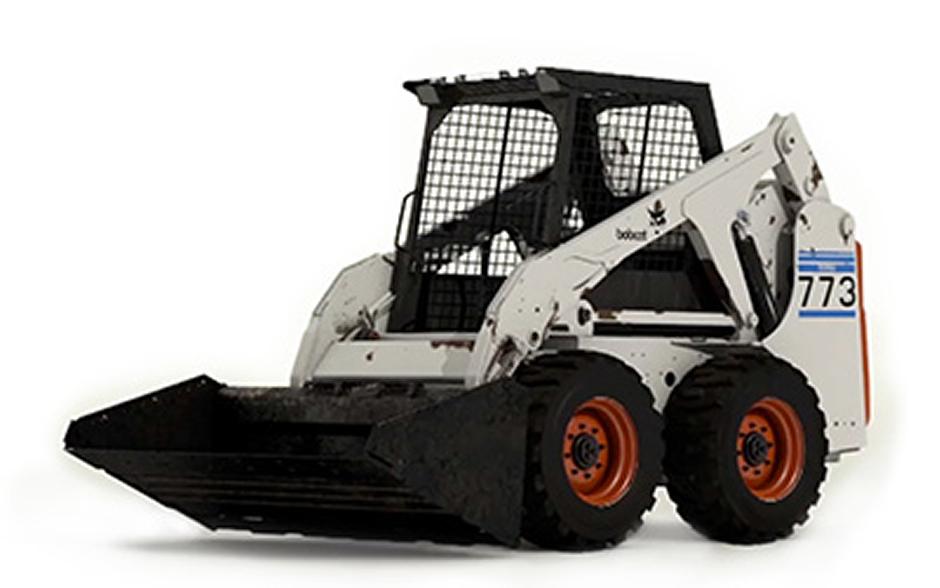 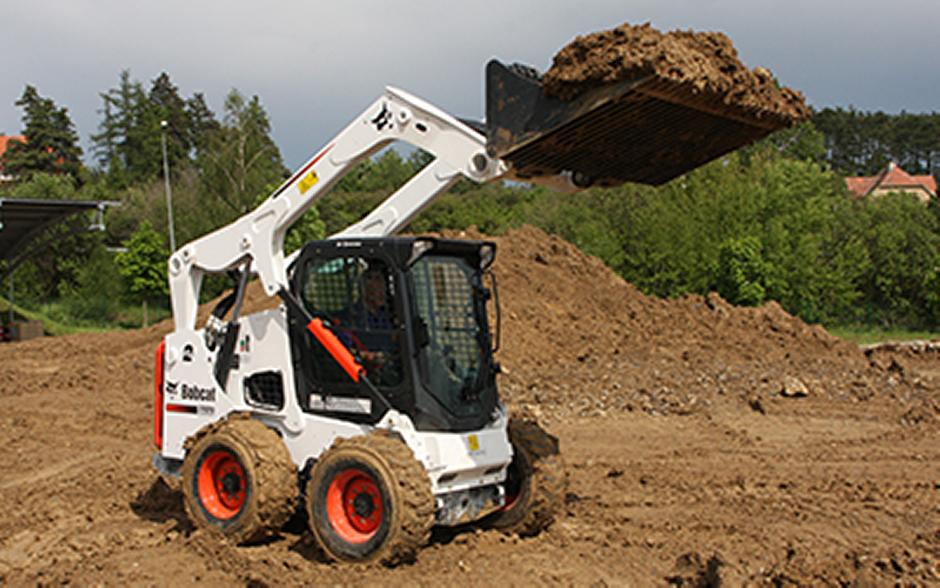 In 2003 the Product Development Centre for Bobcat Europe was established in Dobris, Czech Republic.

In 2006 the loader line was completely remade with the M-Series, introducing the S650 (vertical lift path) and S630 (radius path). The distinctive “cab-forward” design improved visibility while the sealed and pressurized operator cab provided for a clean working environment, better lighting and the latest electronic instrumentation.

In 2007 Bobcat opened a new manufacturing plant and training centre in Dobris, Czech Republic and a new logistics facility for machines and parts in Puurs, Belgium. At the same time, the S100 loader was launched as the first Bobcat machine to be both designed and manufactured in Europe.

In the same year, Bobcat launched its innovative T2250 telehandler in Europe.

The sale of Bobcat Company to Doosan Infracore was announced in July 2007. There were more than 170 dealers in Europe and Middle East and Africa region. 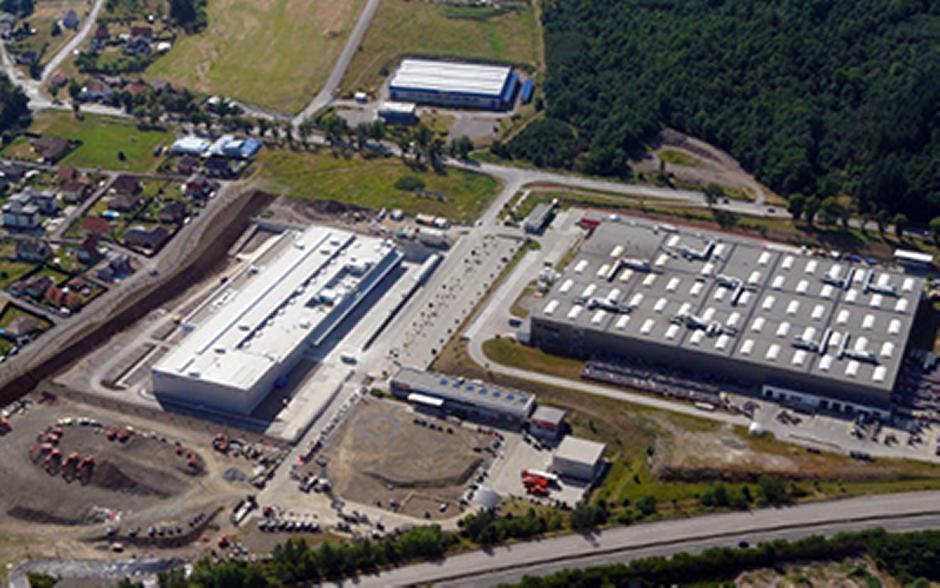 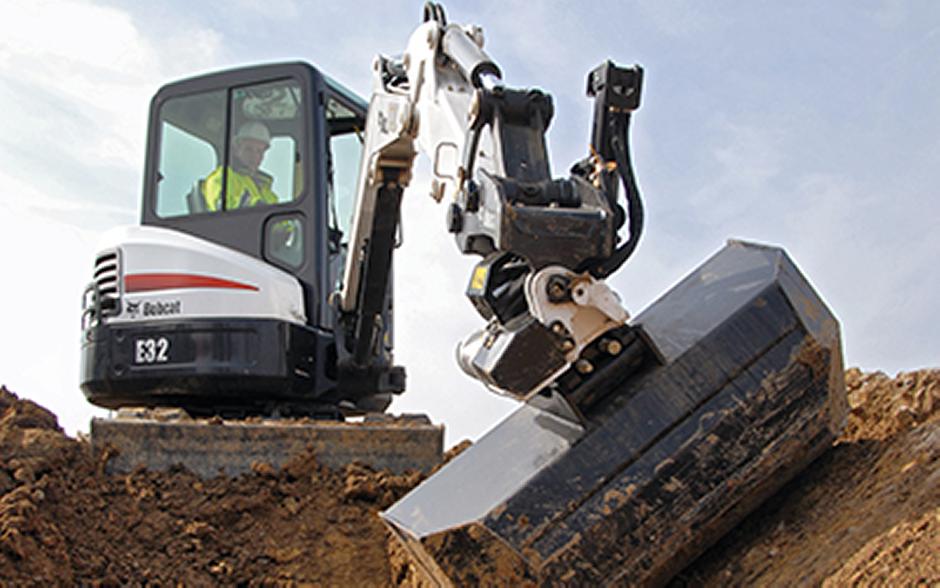 In 2008 Bobcat celebrated the 50th Anniversary of the skid-steer loader and built its 750,000th loader.

The first Bobcat office in the Middle East opened in Dubai in the United Arab Emirates in the same year.

In 2009 Bobcat launched the M-Series of excavators with the E32 model, fully redesigning the line over the next 5 years. Model numbering changes to reflect the industry standards, where the E32 was a 3.2 ton operating class machine.

In 2012 Bobcat marked 25 years of success in the compact excavator market and in 2013 the 50th anniversary of the Bobcat telehandler plant at Pont-Château was celebrated.

In 2014 special editions of the S650 and T650 were built to commemorate the production milestone of a million Bobcat loaders, 56 years after the first Melroe self-propelled loader in 1958.

In 2015 Bobcat opened the new Innovation Centre at Dobris, a European Engineering Centre of Excellence, serving as an expert R&D centre for all Doosan Bobcat engineering teams across EMEA. A new Parts Distribution Centre for Bobcat products opened in Dubai.

In 2015 Bobcat launched new EVO Generation rotary telehandlers and in 2016 a new range of backhoe loaders was introduced to markets in the Middle East and Africa. New generation telehandler ranges for construction and agriculture were also launched, backed by a new three-year warranty. 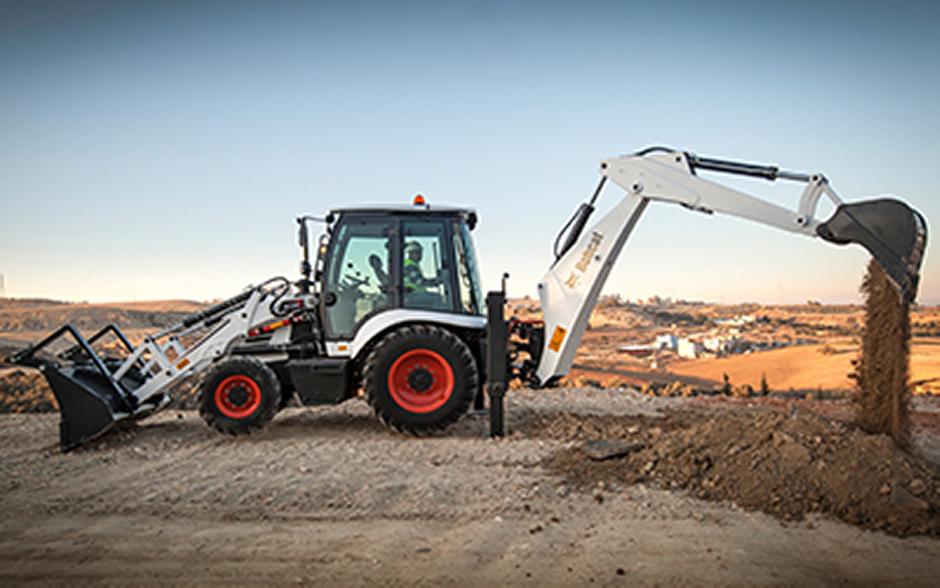 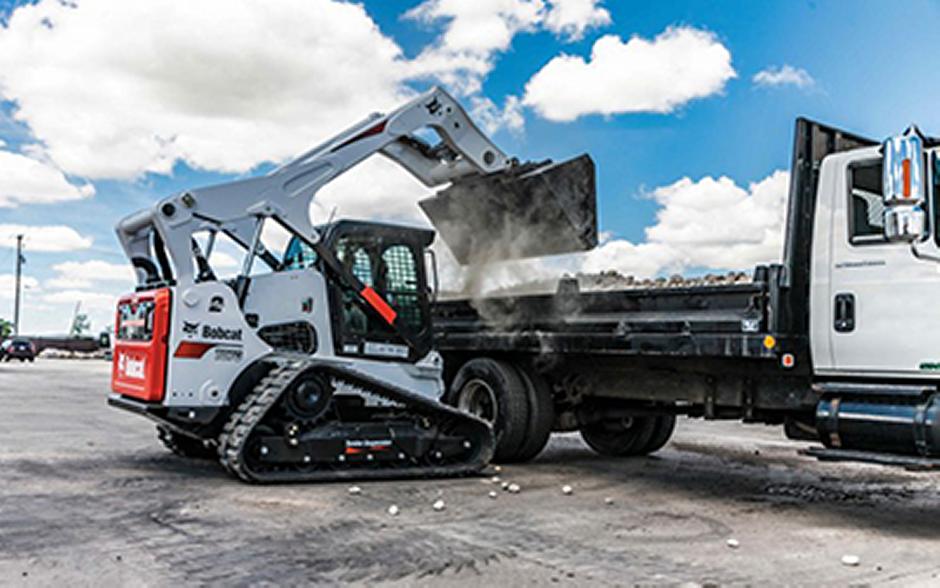 In 2017 Bobcat updated the T870 tracked loader with a ground-breaking torsion suspension system, bringing significant improvements to lift capacity, comfort and durability. A new range of backhoe loaders for sale in markets in Russia and the CIS was launched.

Bobcat S70 and MT55 loaders won the Lowest Cost of Ownership Award in 2017.

The new 2-3 tonne R-Series compact excavators developed entirely at the Dobris Innovation Center are launched at the Intermat 2018 Exhibition. 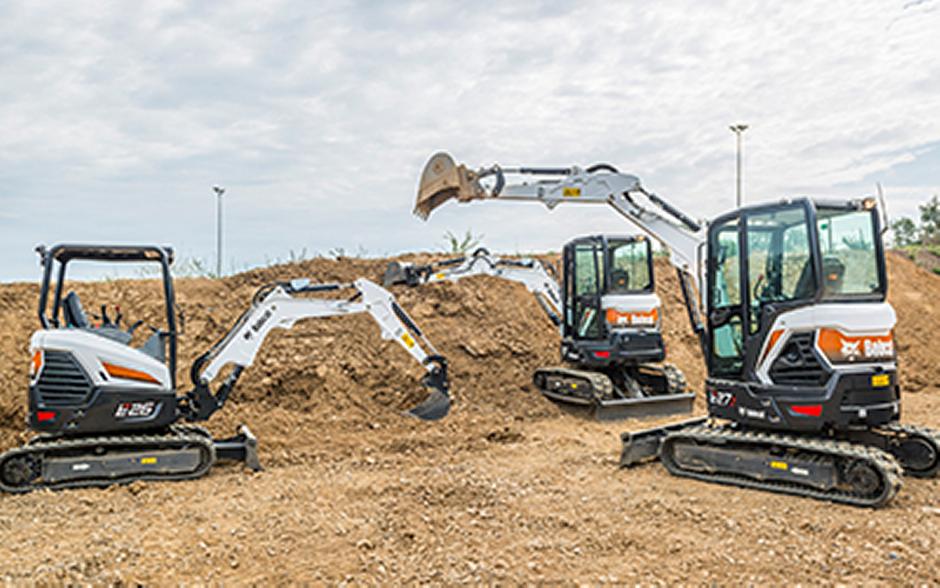