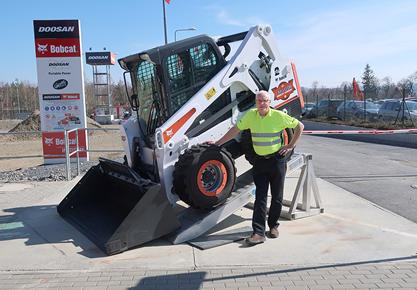 Bobcat management has nominated Robby Bosch, a Senior Field Product Trainer at the company, to be a Bauma Working Hero for the 2019 edition of Bauma, the world’s largest exhibition of construction machinery. Robby is one of only three Working Heroes chosen for this year’s Bauma.

Working Hero is the first Web TV series of its kind in the construction machinery industry. By telling us about key figures like Robby – their everyday events, their challenges and their successes - the Bauma Working Hero format focuses on the important role of people like Robby in our industry. Robby’s story is being told in a video profile that will be shown throughout Munich during the Bauma fair and creates a legacy for the industry to follow in the future.

"The decision to propose Robby as a Bauma Working Hero was an easy one. He is an extraordinary person who has been enthusiastically showing our customers around the world how to get the most out of their Bobcat machines for nearly four decades," says Jürgen Gremez, Training Director EMEA and his current manager at Bobcat who has personally known Robby for 22 years.

With more than four decades of experience on Bobcat machines and nearly 40 years of service at the company itself, Robby Bosch embodies the Bobcat spirit like no other - deployed worldwide, reliable, versatile, productive and always customer service-oriented. After his exceptional time with Bobcat, Robby will retire this year. The Working Hero film provides a great opportunity to look back on his career and four decades of development at Bobcat and you can watch it on YouTube.

A Moving Career that Inspires

Prior to joining Bobcat as a Field Sales Trainer in 1981, Robby already had six years of experience as a Service Manager with a Bobcat dealer in his native Netherlands. He was awarded his first Bobcat loader certificate in 1975 after a week-long training session on the Bobcat M371 and M611. Ever since then, Bobcat machines have always been a central part of his working life.

His move to Bobcat in 1981 marked the start of a career in which he first promoted Bobcat machines as a Field Sales Trainer in Africa, Europe, the Middle East and Russia. "In my early years, two of us covered the entire market area. That's why we often spent several weeks on the road in quite adventurous conditions. The trips in the former USSR in particular were certainly something to remember," Robby recalls.

The second European Bobcat Roadshow took place in 1986. From that point onwards, Robby has been accompanying the roadshows and demonstrating a wide variety of machines and applications directly on site. A personal highlight for him was a roadshow in South Africa. His skills as a demonstrator have not gone unnoticed. In 2015, Robby received the Best Operator Award from Earthmovers Magazine for his demonstration of the Bobcat T450 compact loader at the Plantworx trade show in Leicester in the UK.

"In all my years operating at show grounds around the world, I had never heard of any award for the best demonstrator. I was delighted to be chosen for the award. However, as for my own performance, I’ve got an easy job as the machines I work with are the best," says Robby.

During his long career at Bobcat, Robby has had an up close experience of every generation of every product over his time with the company. From purely mechanical, to hydrostatic, to electronically controlled vehicles. All of these developments and continuous modernizations have made working with the machines much easier for the operator. The handling, the ergonomic improvements as well as the increasing number of equipment options available allow operators to work longer and more intensively with the machines.

"In the past, it often happened that before a demonstration on a construction site we were first viewed with some scepticism. But as soon as the workers saw the amounts a Bobcat could move in 30 minutes, they were always really amazed," Robby says.

It is this very direct contact with customers in many different markets that Robby appreciates most, and which has defined his value to Bobcat. "I am regularly approached by customers at trade shows and events. In particular, customers from the agricultural industry often approach me and tell me that the same Bobcat machine has been in reliable use on their farm for over 40 years. That is of course very nice to hear," Robby explains. "But what moves me the most is when I am approached by customers who have taken over the family business. They often have childhood memories of me demonstrating a Bobcat on their parents' premises decades ago.”

The Show Will Go On

Robby will be working on his last roadshow this summer. But Bobcat will continue to play a big role in his life. He owns one of the most comprehensive private collections of construction machine models in the world. Mainly Bobcat models, of course. The collection comprises over 5000 unique items and is housed in a dedicated 80 square metre room at Robby's home. It is so unique and extensive that it is mentioned in the book "Bobcat: 50 Years" published in 2008. But this is not the only media attention Robby has gained with the collection. Several publications have already reported on it. "I will never get bored with collecting. I'm still missing a few pieces and I'm already looking forward to maintaining and expanding my collection," says Robby.

Robby's possessions do not just include models. In his spare time, he has already completely restored a 1964 Bobcat compact loader. "At the time, skid-steer loaders didn't have a cab. The driver was still wearing a helmet. We've come a long way, not just in terms of comfort," Robby comments. If it is up to him, it will not be the only real Bobcat he owns. "It would be a dream to some day have the opportunity to buy the millionth Bobcat skid steer loader if it ever becomes available," Robby laughs.