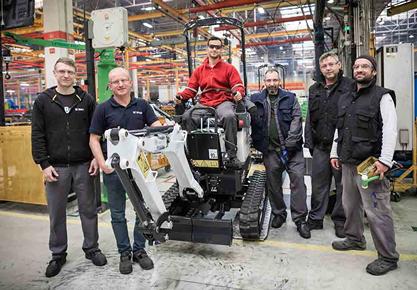 Bobcat has announced a spectacular achievement in 2018 for the company’s market-leading E10 one tonne mini-excavator with the 10,000th unit rolling off the production line in the same year as it celebrates its 10th Anniversary. The E10, now renamed the E10z, is ideal for a variety of applications including rental, construction, demolition, refurbishment, landscaping, trenching and drainage work.

The launch of the E10 mini-excavator in April 2008 was a landmark moment in Bobcat’s history and in the development of the company’s compact excavator range. The E10, along with the E08, were the first excavator models designed and built from start to finish in Europe. The goal was to replace and greatly exceed previous models by meeting the expectations of customers in Europe and beyond. The 10,000 plus sales and the reputation the E10 has earned over the last 10 years confirm that this objective has been more than achieved.

The E10 is now called the E10z to reflect that it is a zero tail swing mini-excavator with a maximum digging depth of 1.82 m and a machine weight of 1066 kg. Bobcat’s E10z is designed and engineered to provide the best combination of high performance, stability, operator safety, ergonomics and durability in this segment of the mini-excavator market and offers the ability to retract itself to easily pass through standard 80 cm door openings.

The main feature which differentiates the E10z from other machines on the market is the patented side adjustable consoles which accommodate hydraulic pilot pressure controlled joysticks. This design is unique in its class, allowing the operator to enjoy the comfort and feel of much larger machines, whilst being able to adjust the width of the consoles for easy passage through narrow openings.

In its 10th anniversary year, Bobcat customers and dealers alike continue to be very impressed with the E10z.

Tom Macfarlane, Owner of True Plant Hire Limited and Trueline Midlands Limited, based in Wymeswold in Leicestershire in the UK, says: "All of our fleet below 8 tonne is from Bobcat and has been supplied by our local dealer, Butler Reynolds. The Bobcat E10z was one of the first machines we bought for our hire fleet. It is a very good machine offering compactness and versatility with a width of 710 mm allowing it to pass through doorways and other narrow passages.

“For a small machine, it offers much more power than you'd expect for a 1 tonne model and much more than other minis of this size on the market. It combines this with high operator comfort - the joysticks are easy to use and offer high precision when working."

According to Bertus Boer, general director of Inter-Techno, the Dutch reseller for Bobcat and one of the most active sellers of the E10z in Europe, the market share for Bobcat compact excavators in the Netherlands is steadily growing.

“The E10z mini-excavator in particular is selling really well,” he says. “This year we have already shipped well over 70 units. We find that the E10z is especially popular in gardening and landscaping. For many years, the standard equipment of a gardener was a lawnmower. But because it is becoming more and more difficult to find personnel, companies are able to do a large part of the manual work quickly and efficiently, thanks to a mini-excavator like the E10z and its wide range of attachments. The E10z is operated with a servo joystick. This is really very comfortable, so employees can work with the machine eight hours a day without any problems.”

The second smallest model in the Bobcat excavator range, the E10z is easy to transport. In addition to the access provided by its retractable undercarriage reducing its width to only 710 mm, the integrated foldable TOPS (Tip Over Protective Structure) facilitates passage through openings with low headroom, for work inside buildings and in basements. Once the excavator is positioned and ready for work, the undercarriage on the E10z can be expanded to 1100 mm, for maximum stability in all working conditions.

The E10z’s minimal width enables excellent manoeuvrability in confined spaces, while the zero tail swing design is an additional advantage when working in tight areas. Thanks to a standard second speed range, the E10z is also able to move quickly around job sites, to complete projects faster and work more efficiently.

In this category of machine, the E10z offers several important safety features for operators. A grab bar provides assistance for getting onto and off the machine. Entry and exit from the excavator is also made easier thanks to the completely open, flat area for the feet in the operator station. This design makes it easier to clean the area for the feet.

The design of the E10z ensures that the boom offset cannot reach the feet, providing maximum protection in this area. Operator safety and comfort is further enhanced by the completely retractable seat belt on the E10z. Both the left and right consoles on the E10z, which serve as comfortable arm rests, need to be lowered and locked in order to operate the machine. The position of the joystick controls on the E10z can also be adjusted to suit different operators.